The history of Pilates: Meet the founder of the methodology and inspire your students!

Everyone knows that Pilates is currently considered one of the best practices for maintaining fitness, correcting posture, promoting physical rehabilitation, and providing various health benefits. But do you know about the history of pilates and how this practice started?

To understand how the practice was invented, we have to know a little more about the story of its creator – Joseph Pilates. Follow the details below and see how to inspire your students with his story!

Who was Joseph Pilates?

Joseph Pilates was born in Germany, in 1883. His father was a gymnast and a Greek descent, and his mother was a German naturopath who believed in the stimulation of the body as a form of self-healing, without the need for medicines or surgeries.

Both, the philosophy of the mother and the achievements of the father, were great influences for Joseph Pilates to create the therapeutic exercises. 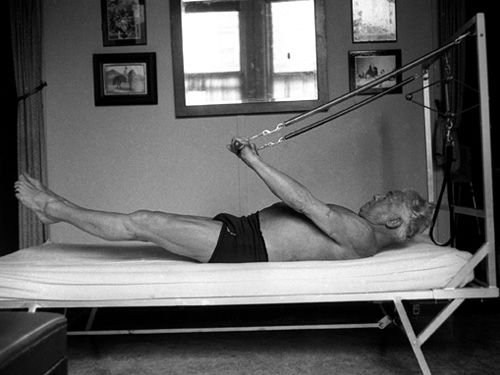 In his childhood, Joseph Pilates was a very sick child. He suffered from asthma, rickets and rheumatic fever. So, as time passed by, he decided to overcome the physical limitations of his body. To change his life, he went on to focus on breathing techniques, which helped with asthma.

Also, when exercising outdoors in his shorts, he cured his rickets, which is basically caused by a deficiency of vitamin D (very present in sunlight, by the way). His evolution was so good that, at age 14 he was already performing for photographic essays of human anatomy.

Joseph Pilates also loved to ski and to be practicing activities outdoors. He studied bodybuilding, martial arts, gymnastics and yoga, which also influenced him further in the creation of the Pilates method.

The history of pilates: First appearances of the Pilates method

In 1912, Joseph Pilates moved to England, where he worked as a circus performer, professional boxer and Scotland Yard’s coach for personal defense. However, during World War I he was arrested along with other German citizens, by the British authorities.

The conditions in the place where Joseph Pilates was imprisoned were very precarious. Still, he insisted that all members of his pavilion participated in the physical activities he created, in order to maintain physical and mental well-being.

At that time, Joseph saw many wounded German soldiers, lying in bed. Unsatisfied to see his inactive companions, he removed some springs from the beds and fastened them at the headboards, in order to create an improvised equipment to provide muscle-endurance exercises to those in bed, unable to walk or move much.

These beds with springs would later become part of the history of pilates, beeing transformed into the well-known equipments of the method, Cadillac and Reformer.

The creation and the history of Pilates

After the war, Joseph Pilates returned to Germany. At this time he acted in the dance area and helping train police officers. He was also pressured to train members of the German army. However, eventually disappointed with his country’s policies, he migrated to the United States.

During this trip, Joseph Pilates met Clara, who later became his wife. The couple started a Pilates studio in New York and began teaching and supervising their students until the 1960s. 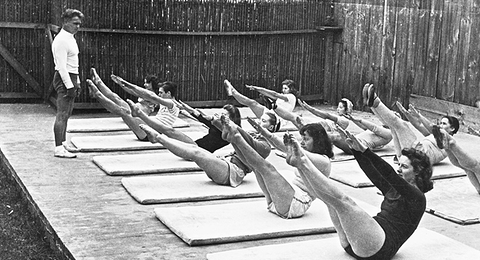 Joseph Pilates’s studio was close to a number of dance studios, giving prominent members of the dance area the chance to discover it. Over time, many dancers, actors and celebrities began to attend the Pilates studio for the development of strength, grace and even rehabilitation.

Joseph Pilates wrote two books: Your Health in 1934 and Return to Life Through Contrology in 1945, and created many of the devices used today in the Pilates method, such as Reformer, Cadillac, Ladder Barrel, among others.

You can find on amazon the book The Complete Writings of Joseph H. Pilates: Return to Life Through Contrology and Your Health.

He passed away in 1967,  at the age of 83, in New York City. He inhaled too much smoke, when trying to save his equipments from a fire that consumed his studio, and died a few days later, after the incident.

Although he had no children, his legacy and the history of pilates was passed on by his disciples. Today, thanks to all the efforts and perseverance of Joseph Pilates, it is possible to count on an exercise modality capable of benefiting all types of people, enabling the achievement of not only physical but also mental well-being.

Pilates in the Cadillac: Advanced exercises with Rafael Jaque